5 Proven Ways You Can Protect Pond Fish From Herons

5 Proven Ways You Can Protect Pond Fish From Herons

Keep Your Fish Safe And In Your Pond For Maryland, DC, And Northern Virginia Pond Fish Owners

You should be able to protect pond fish from herons and other predators.

But, whatever methods you are using aren’t working like those other sites said they should. Or at least, they work for a bit and then don’t seem to do anything but slow herons down.

A great example of this is the water sprayer. It may scare them off at first, but they’ll come back once they figure out it doesn’t hurt them.

Herons are smart birds, which makes them hard to deal with.

More and more of your fish go missing or turn up on your lawn, of which both can be difficult to deal with. It’s frustrating and that can quickly lead to heron-hating.

Just don’t hurt them, they are protected by the government.

Instead, you can try one or more of these 5 tactics to protect your pond fish (like the fish tunnels in the video below):

You may also need to protect new fish from your pond water. Introducing them the wrong way can end up making them sick or hurting them.

We have seen and recommend these 5 proven ways to protect pond fish from herons:

Of course, each situation is as unique as your pond. Not everything on this list will work for you and your pond fish, well, except the caves and tunnels but that’s more on your fish than you.

You can keep herons from eating your fish. You can enjoy your fish without worry.

All you need to do is keep reading.

You can learn all about pond fish using our learning guide >>

1. When The Heron Just Won’t Quit

Your most effective solution for protecting pond fish from herons is to raise a net barrier over and around your entire pond.

It should keep herons out of your pond, or at least make it too hard for them to try for long. Of course, it can detract from the look of your pond.

But your fish should be safe. 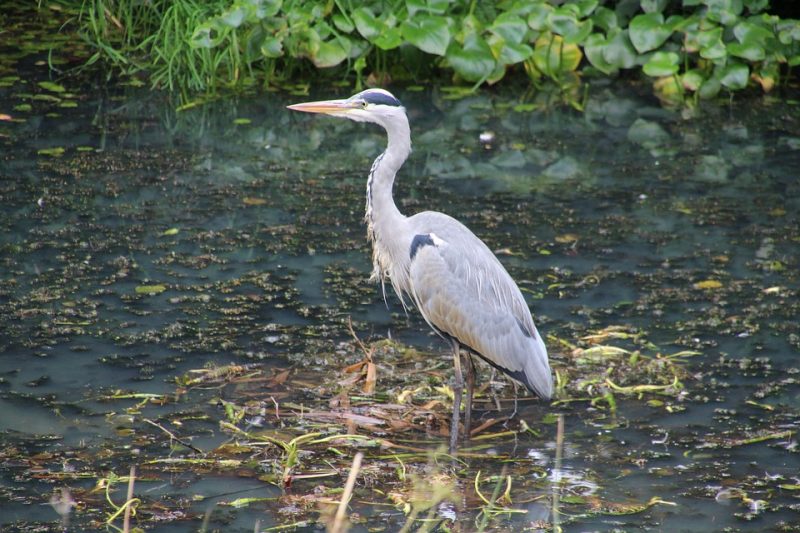 It should be at least 60cm above the water and the hole size should be 2.5cm or less. This way herons can’t put their beaks through, which is great because sometimes they’ll just attack the fish even if they can’t eat it.

You may not have to leave it up 24/7 though. It’s mainly in spring and fall when herons are a problem as this is mating and migration season. 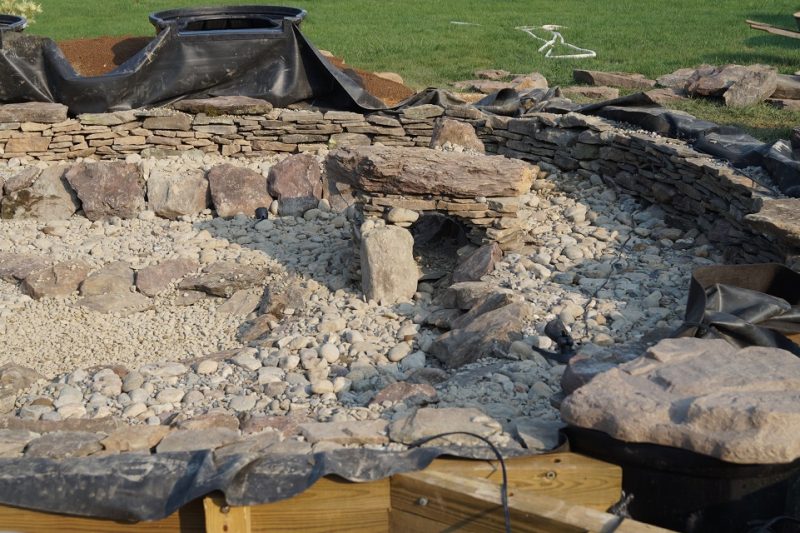 If a hungry heron starts stalking your fish, they can hide in these areas until the bird gives up and goes looking for easier hunting grounds. You’re also giving your fish more room to swim around in and explore, which your fish will surely appreciate.

You can also start protecting your pond at the water’s edge.

There’s more you can know about fish caves and tunnels >>

You could install a fence around your pond, but it may take away from the natural beauty it provides.

Instead of a fence, why not plant bushes and tall, thick plants. 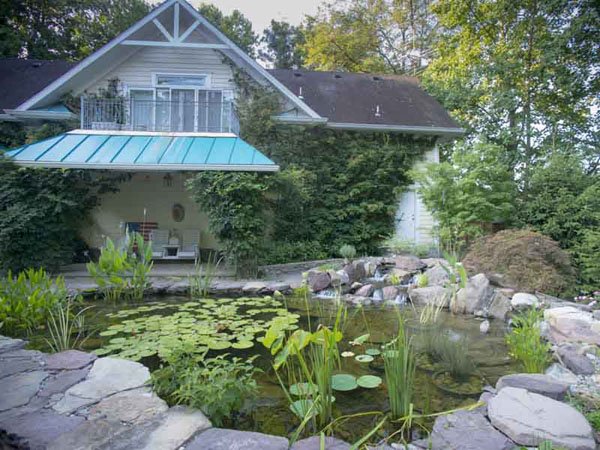 You can give your pond a natural backdrop and your fish a plant shield. Floating plants are another option as they can help hide your fish from preying eyes.

If you’re using heron decoys do not use them during mating season (April – May) as it can actually attract herons looking for a mate. You won’t want to leave it out all the time either as other herons may think your pond is actually a good fishing spot.

Moving it and taking out down every few days should do the trick. Other than that, you should be fine. You can also put fish decoys in your pond for the heron to hunt instead of your live fish.

While talk radio can be interesting to us, too blue herons it sounds like their enemy: people.

Herons won’t land in yards where there are people, and just because they can’t see them doesn’t mean they aren’t there. This makes herons cautious of landing in your yard.

Before you leave, set a radio outside and tune it to a talk show. It’ll run all day and it won’t cost you either.

Enjoy Your Fish Without Fear

Take back control of your yard and keep herons away from your fish friends! These methods should make it harder for herons and easier for you.

What method do you think is best? Let us know in the comments below.